skip to main | skip to sidebar

One of the highlights of Auntie, Mimi, and Poppy's trip to Haiti was washing the feet and painting the nails of over 200 women and children.  As I mentioned Monday, Mommy first thought this act of service was a huge, frivolous waste of time.

She was wrong, though. This comment from our blog friend, Jessica, was spot on.  She said, "It may seem like frivolity, but to women who never get the luxuries we do, I'm sure it was very life-giving. Like making eye contact or touching the hand of a homeless person, anything to show you see them as a human being is an incredible gift."

After hearing several members of our church's Haiti team describe how God orchestrated the events of this day, Mommy came to realize that the women of Gelee Beach really did see these pedicures as a gift.  And since there's no way I could recount the details as well as someone who was there, I decided to share Auntie's account of that day (with additional commentary from Mommy in paranthesis...because she always likes to add her two cents).

"There are so many things that God did while we were in Haiti, and time after time he showed us his divine plan for us being there.  One of the most impacting events for me on this trip was the foot washing.

Every night we spent time debriefing about the day and praying for God to show us his plan for the next day. For those who don’t know, the original missionaries we were going to work with were unable to take on our team and we found this out 2 weeks before our trip. But we believe God ordained this change and we all trusted that God had a reason for this last minute change, even though it was originally hard for some of us to accept.

Sunday night after dinner we began to pray for God’s direction for Monday and we really poured out our hearts with wanting God’s agenda to plan out this week... even though it started out with last minute changes that caused chaos. Our original plan for Monday was for us to go out and distribute surveys for how the water filtration system (previously distributed by the missionary couple we worked with) was working in the home, as well as some vitamins and food to the families. During our prayer time, God really feel in the room and His prescence was so strong...which really happened every night.

Rachel, who was the missionary, really felt that God gave her a vision of us washing people’s feet as a prophetic act. She felt that as we washed their feet they would in turn begin to wash each other’s feet, even thought they wouldn’t understand the spiritual meaning. It would still be an act of service and love for them to experience. She really didn’t know how this was going to happen, but believed this was what God had planned. (Before the team from our church arrived in Haiti, Rachel and her husband, James, had received a large donation of nail polishes.  They had been holding onto them for a while, wondering how to make use of them.) 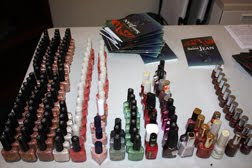 Her husband then asked some Haitian people (who work with them) for their response to this idea from a cultural perspective. Their initial thought was that they did not think this was a good idea, because it could be taken as embarrassing or prideful for them to allow us to wash their feet.  They thought the people would definitely not wash each other’s feet because the were many in the community that did not like each other.

We serve a God who does miracles and goes beyond comprehension and understanding, though, and we really believed this was still God’s desire. We went forward with our plans.

We set up 3 washing bins, an area where we would lotion and massage their legs, and the final station we would paint their toes. 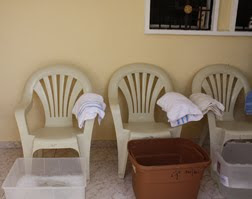 (While the women prepared the washing/pedicure stations, the men from the group went through the village distributing water filteration surveys, vitamins, and food as planned.  At each home, they invited the women and children to the missionary's home later in the afternoon for a pedicure.  News of the pedicures traveled fast!  The men said that everywhere they went, people were talking about the pedicures they were going to be given.  Many women and children even changed into their best clothes for the event.) 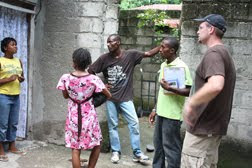 As the women and children began to come, you could see that they really were blessed. Smiles were evident (as a general rule, Haitians rarely smile...they are very somber people). 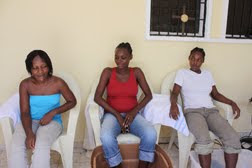 There were even several women and children who worked by washing and painting toes without being asked.  This was a miracle in itself! 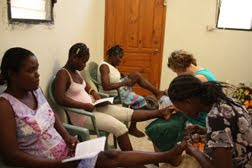 (The team also gave each women a copy of the Gospel according to Saint Jean.  They showed those who could read the passage where Jesus washes the disciples feet.) 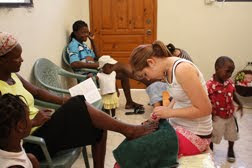 The town was all talking about the pedicures they were getting.  Even at the end of the week, there was still talk in Gelee beach about how they all got pedicures. It was a very humbling experience to realized how hard these women’s lives were. Each foot I touched was rough and scarred with cuts, some had open wounds and fungi. I really believe it served as a symbol of how their hearts and sprits are the same. But yet, God was able to allow us to minister to them even though they were unable to fully comprehend or understand why we would wash their feet." 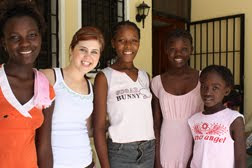 Alyssa, This is so awesome. I know it was a "God anointed" thing and y'all were a tremendous blessing that they will not forget.
Connie Moss

What an awesome experience! We take so much for granted!

It was wonderful to see the smiles on their faces! I believe there will be many more stories to hear in the future of that one act of serving & loving the Haitian women & children.

Rachel Moss
My name is Rachel Moss and this is my 9th year of teaching. I love working with first graders! My hope is that this blog will be an effective way to let my students' parents see all of the learning that is taking place in our classroom each day.